36 Nurses from 1 Hospital Unit Pregnant At The Same Time 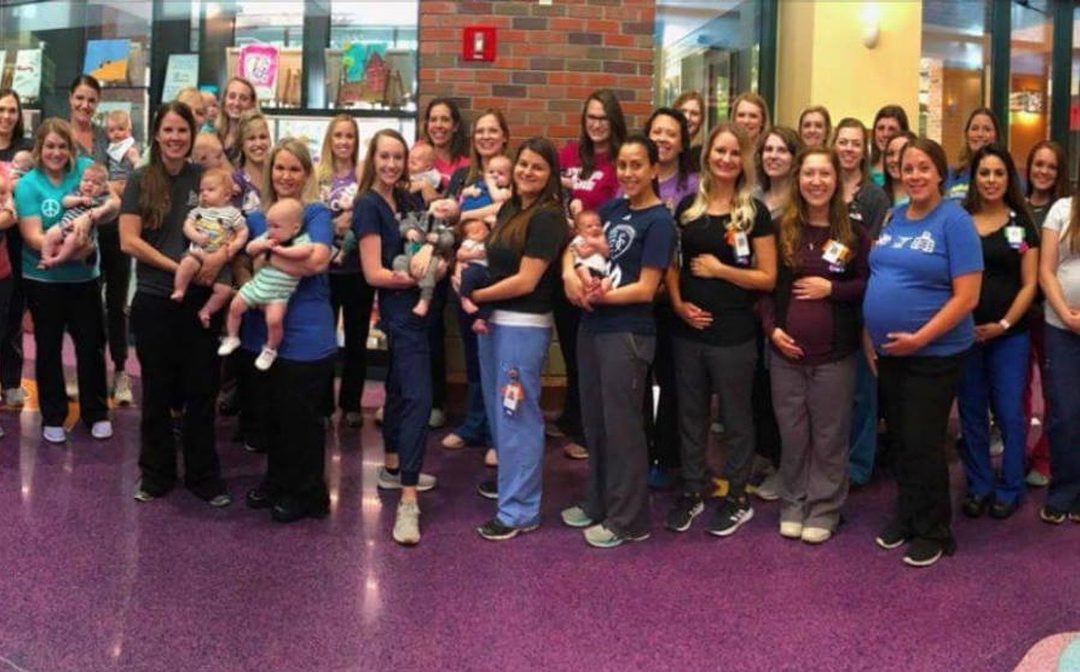 It’s not a far stretch to guess that NICU nurses are quite fond of babies, but you could say that the nurses from the NICU unit at Children’s Mercy Hospital in Kansas City really, reallylove babies.

Need proof? Just check out the matching baby bumps that a whopping 36 nurses from the unit were all rocking at the same time.

All of the nurses are due to have their babies in 2019, and a majority of them have already given birth. According to CBS News, as of the start of August, out of the 36 pregnant nurses, there have been 21 deliveries so far, as the moms welcomed a respective 19 sons and 2 daughters, with the boy: girl ratio clearly tipping in favor of the men so far. (Come on girls, you can do it!)

As evidenced by the outpouring of comments on Children’s Mercy Hospital’s Facebook page with the collective pregnancy announcement for the 36 women, this is a group of dedicated nurses who are loved by the community they have cared for. “You ladies helped take care of my girl last October and we are forever grateful at the amazing care we received for the hardest 15 days of our lives. Thank you from the bottom of our hearts,” commented one mother. “I’m so grateful for NICU nurses—they took care of my baby girl at mercy in Joplin when she was born [last] year,” said another.

And just like they offer plenty of support to the parents and families who come through their NICU, the 36 nurses support each other through pregnancy, playdates, and the hard days of parenting. From surviving nursing school together to now throwing each other baby showers, the unit is one close-knit group. Michelle Janes, 29, who’s due in November and is already mom to a two-year-old son, told USA Today that the nurses even have their own Facebook group, where they discuss everything from “diaper rash to kids crawling out of their crib.”

Some of the nurses who have spent their days and nights caring so diligently for others’ babies are getting their first taste of what it means to be a parent – and experiencing the immense love on the other side. “…Now when I take care of a baby I really do… I know what that mom and dad feel like and this baby is their whole world,” one of the 36, Sarah Carbaneau, told CBS.

BABY BOOM IN THE NEWS

Many news outlets have commented on this unusually large 2019 baby boom, with talk that it may even be a world record. I was not able to confirm if the 36 nurses are, indeed, in the running for a world record, but according to my research, 36 nurses pregnant at the same time on one unit (and a NICU unit, no less) is unprecedented. There was a boom of 9 pregnant nurses in Maine and 14 in Boston earlier this year, 16 in Arizona in 2018, and 11 in Ohio, but no numbers even come close to these ladies, which is pretty darn impressive and also makes a lot of people wonder what is in that Kansas City water.

However, according to Allison Ronco, a nurse at the hospital—incidentally, a 2019 mama herself, having welcomed her son in January of this year—the baby boom is not that unusual for the hospital. It may be the largest so far, but Ronco told Good Morning Americathat there is “always” a baby boom going around in their neck of the woods. No one can say for sure what’s behind the Kansas City families’ baby boom, but at least one study has found that pregnancy can be contagious, so in this case, maybe babies just beget babies?

But no matter what is behind the mega baby boom at Children’s Mercy Hospital, one thing is for sure: all of those nurses are going to make amazing mamas. Because speaking as a mom who just left the NICU with my preemie just six short weeks ago, let me just say that if there was ever a doubt in my mind that NICU nurses weren’t absolute heroes, all my doubts have been banished. Every single NICU nurse I came into contact with during our stay blew me away with professionalism, compassion, competence, and during one particularly long shift when we both struggled to stay awake, a shared love of caramel macchiatos.

Simply put NICU nurses are heroes to begin with. And if you throw some human-growing onto their resume of skills, well, that’s even more proof of their superhero status. Congrats to all 36 of the new mamas and mamas-to-be! We know that you will be rocking motherhood and life as a nurse, because well, who would know how to take care of a baby better than you, right?