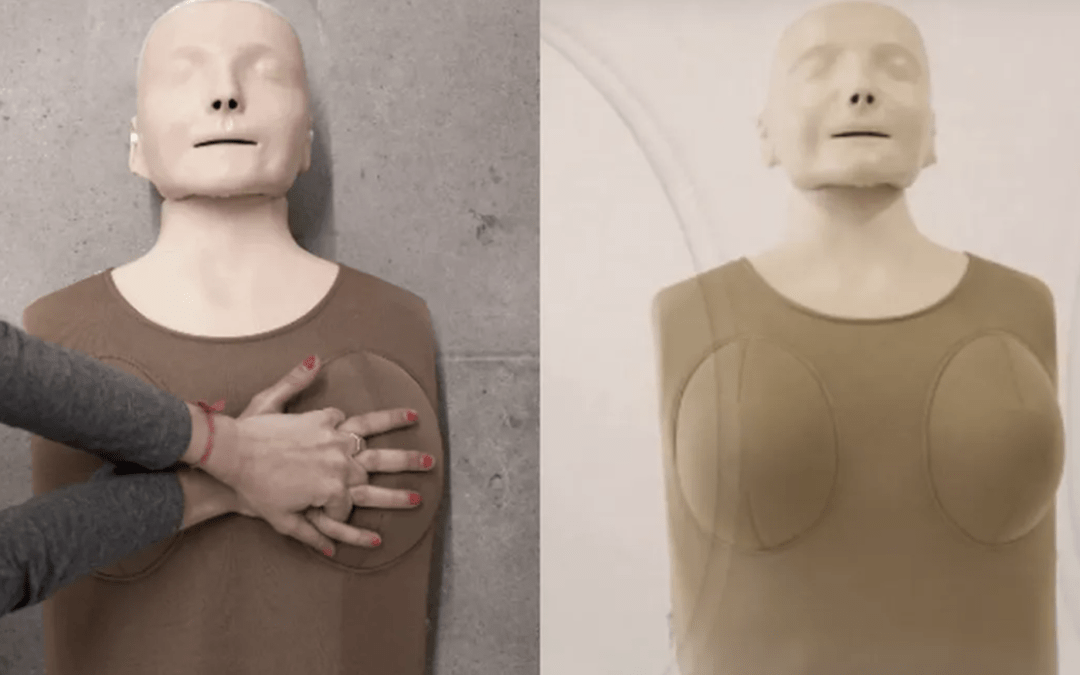 The “Womanikin” is a special vest meant to teach people how to do CPR on people with breasts.

Teaching people how to do CPR is a literal life-saving tool. But until now, CPR has usually only been taught on “male” manikins, leading to a whole host of people who, unfortunately, are only trained on how to recognize physical landmarks and perform compressions on someone who is flat-chested.

The Womanikin, unlike a manikin, is a vest-with-breasts attachment designed to fasten over the commonly-used existing flat-chested CPR training dummies to transform them into breasted bodies. She’s a universal training tool, say the founders, to challenge “biased CPR training”–and she could change the way CPR is taught for good.

Why a CPR Mannequin With Breasts Matters

At first glance, it might not seem like the presence of breasts on a manikin matters that much. After all, CPR is CPR, right? But as it turns out, it does matter, especially in a non-hospital setting. Statistics have consistently found that women are far less likely than men to receive public CPR or have an AED applied to them during an emergency than men.

Experts have theorized that the reason behind the disparity is that because the majority of people out in the real world aren’t trained on how to do CPR on a person with breasts, they are less likely to feel confident, able, or willing to then perform CPR or apply an AED when faced with the situation in real life.

Think about the last time you took CPR training–did your training dummy have breasts? In some hospital-based settings, there may be funding and resources for nurses and other healthcare professionals to train on manikins with breasts, but unfortunately, for many community CPR training programs, resources can be more limited to flat-chested manikins only.

And all that adds up to risk for people with breasts.

The Womanikin, according to NPR, was actually developed by ad agency Joan Creative as part of a campaign with The United State of Women and designed with a team that included CPR experts and cardiologists. The entire campaign, along with the vest itself is meant to bring awareness to the disparities in CPR and cardiac arrest. When you think cardiac arrest, chances are you probably picture an elderdly man with a belly clutching his chest, but men are not the only people who experience cardiac arrest. 1 in 3 women die of heart disease, and a major part of the problem with women and heart disease is recognition, detection, and the lack of swift intervention.

Because women aren’t represented as people who have a cardiac arrest in training tools, they are less likely to receive prompt, life-saving treatment and more likely to die from a cardiac incident.

A 2017 study, for instance, found that men were 23% more likely to survive after receiving public CPR than women. Although the chances of having to give someone CPR in public is still relatively rare, the study concluded that it’s very important for everyone to be trained on how to give bystander CPR, no matter what the person looks like, what size they are, or how old they are. It’s important that no one is afraid to give CPR in public and the issue, of course, extends beyond just women–it’s about bringing awareness to all types of bodies.

“This study and other investigations from our team are only just beginning to peel back the layers on CPR rates and training disparities, cardiac arrest survival, and the public’s understanding of the importance of rapid intervention during a cardiac emergency,” said the study’s author.

The Womanikin has partnered with training schools and is part of a larger conversation to try to get both the general public and health professionals properly trained on how to not only be willing to act to give someone CPR in a public setting, but feel confident in their technique, no matter what the person looks like. The most important thing, experts urge, is to be aware that you can’t “hurt” someone by giving CPR.

“You can’t hurt someone worse than dead,” Marion Leary, Penn Nursing’s Director of Innovation and the lead author of a study that found that even in virtual reality, people shied away from giving CPR to female avatars, told NPR. “If you do nothing and they’re in cardiac arrest, a person will die.”

So, how exactly does one perform CPR on a Womanikin, or more importantly, an actual person with breasts? Well, as the Womanikin website explains, CPR doesn’t differ for someone with a flat chest or someone with breasts. The technique for all adults is the same: place the heel of one hand two inches above the breastbone (where the ribs come together and meet), interlock the other hand on top, and compress down.

What the typical training videos and demonstrations don’t show you, however, is that when you perform CPR on a woman, using correct technique could mean that your hand will touch or even partially cover a breast.

“Yes, this will mean you are touching her left breast,” the Womanikin site quips. “Don’t worry. You might save her life.”

You can learn more about the Womanikin, download a tool kit that includes design patterns, or donate to bring one to your local CPR training space here.