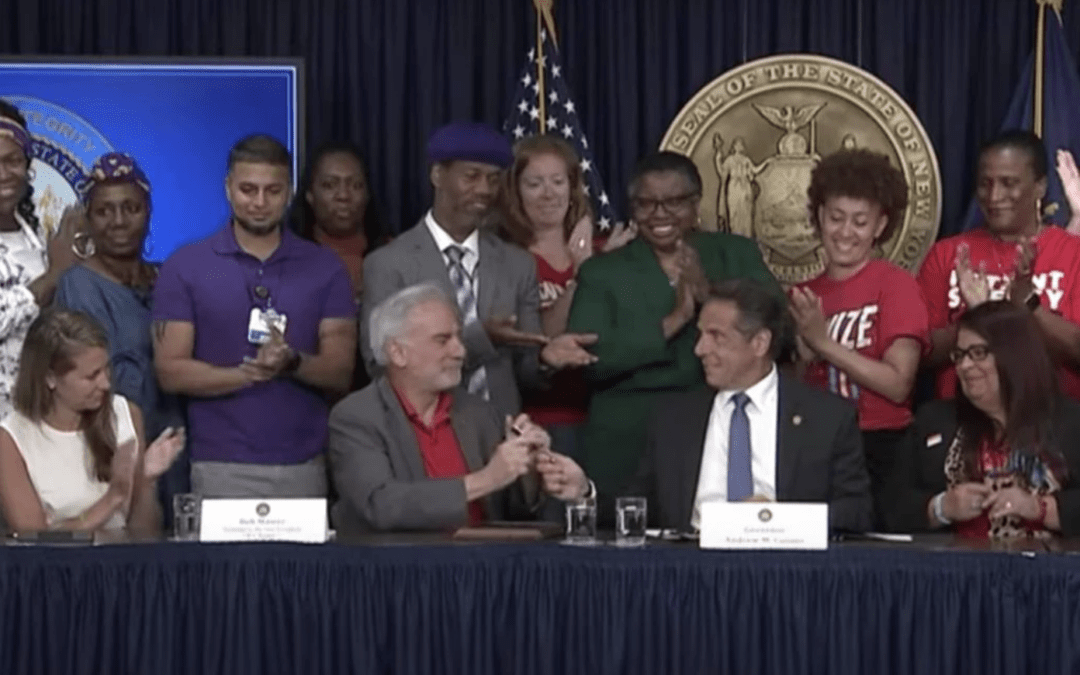 The law is pretty revolutionary, although when you think about it, it really shouldn’t be revolutionary to include nurses–the people doing the actual clinical care–in the plans for how many nurses are needed for clinical care.

And yet, nurses have historically been left out of that conversation. So here we go, with New York leading the way for what will hopefully be a future where direct clinical care workers are included in the decisions that actually affect clinical care.

What the Law Is

The law mandates that hospitals in New York must establish specific staffing committees. These “staffing committees” will be made up of RNs, LPNs, ancillary staff members who provide direct patient care, and hospital administrators, and together, they are tasked with coming up with clinical staffing plans for specific units in the hospital. The plans have to include how many patients are assigned to each RN and how many ancillary staff members are assigned to each unit as well.

Staffing committees have until July 1st to submit their plan to the state’s health department and then they have to actually implement that plan by the following January, the first of the month. As you may have guessed, the push to include more nurses on the planning end of staffing is in response to the challenges that nurses faced during the COVID-19 pandemic.

“The COVID-19 pandemic placed unprecedented strain on New York State’s hospital systems and revealed a host of issues with regard to staffing and the effective allocation of resources,” a statement on Governor Cuomo’s website reads. “This legislation requires hospitals to create committees that include the very same staff who treat patients on the ground every single day and come up with plans that take their concerns into consideration when allocating staff. We need to make sure nurses and ancillary staff have a voice in their hospitals, and these new requirements will make sure they collaboratively plan for the future.”

As of right now, the law really only is only directly applicable to unionized hospitals, so it’s not clear how non-unionized facilities will adhere to the law. And interestingly enough, the original bill would have also established minimum staffing guidelines, but that aspect of the bill was negotiated out. The reasons for that aren’t entirely clear, but it’s possible that nurses may have pushed for flexibility to adjust staffing guidelines as needed for specific units.

How Nurses Are Reacting

After the bill was signed into law, The New York State Nurses Association released a statement calling the legislation, along with another bill that was passed for setting minimum staffing levels at nursing homes, a “giant step forward.”

“The unprecedented challenges brought forth by the pandemic—including barebones staffing, PPE, and equipment that stretched the frontlines to the breaking point—made healthcare workers demand change more forcefully than ever before,” the Association added. NYSNA nurses and healthcare professionals applaud these laws as essential to carrying out their legal mandate to advocate for patients. The laws bring greater accountability and transparency to the healthcare system and are set to go into effect in January 2022.”

The NYSNA also posted a helpful video on their Facebook page that breaks down some key components of the staffing bill, namely that the law will:

Some RNs reacting to the bill pointed out that the bill still has some flaws, such as the fact that patient acuity isn’t always isolated to the unit they are on–a patient on Med/Surg could technically have more complicated conditions, medications, or procedures that require more time from the RN than a patient in ICU. Or, some expressed that the bill could take years of “planning” before it actually translates into real effects on the floor.

But regardless, many nurses see the bill as at least some kind of positive step forward into recognizing that frontline workers not only deserve to be part of the conversation about staffing guidelines but are a necessity.

“Thank the Lord,” commented one nurse on Facebook. “Hopefully this actually changes things within the hospital.”