Stories From The Frontlines Only Nurses Will Understand 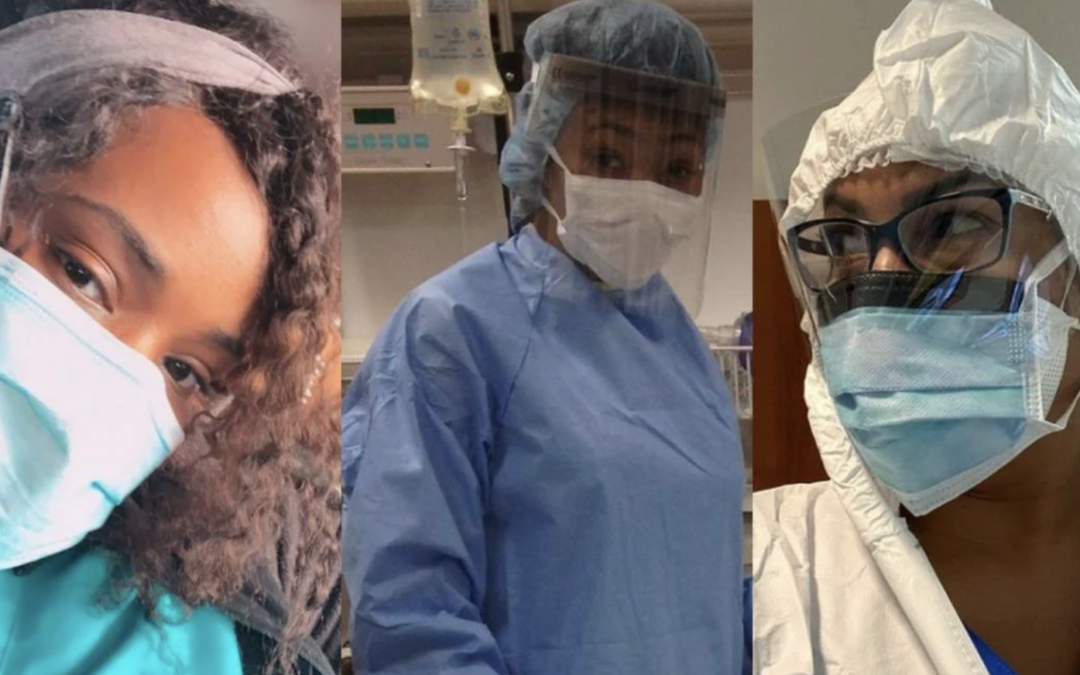 In a most recent episode of Ask Nurse Alice, Nurse Alice went deep with two real-life nurses on the frontlines of the pandemic. Nurse Alice praised the women for their work and in bringing them to the table to talk, nurse-to-nurse told the viewers that this was their chance to get the real tea on what it’s like on the frontlines. She vowed to dig in deep with the conversation–and she didn’t disappoint. 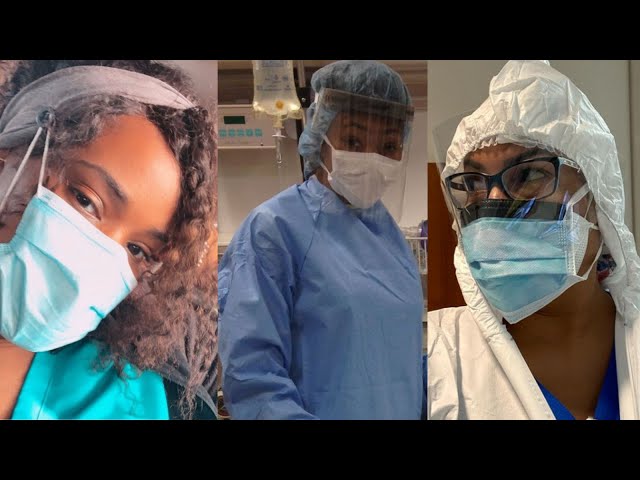 Nurse Alice talked to Kelita Raphael, BSN, RN-BC, known for her hilarious and relatable TikToks and Instagram videos at @nursekayknows and Ivette Palomeque, RN BSN, @nurseweehtx, an ICU float nurse who took on some early-pandemic assignments and has been featured on media outlets, such as ABC, for her work, to get the scoop on working in the early days of the COVID-19 pandemic, how finding humor through nursing can make all the difference, the importance of new grads and how teamwork will helps nurses move forward into the future.

Laughing through “The Good, The Bad, and the Ugly” of Nursing

First up in Nurse Alice’s chat with these two frontline heroes was Kelita Raphael: Kelita works as an Med/Surg RN in New York and started in nursing at only the age of 16 working in an LPN program. She told Nurse Alice that when the pandemic hit, her high-acuity Med/Surg and PCU unit was transformed into a COVID unit, which she said was a “difficult” transition. 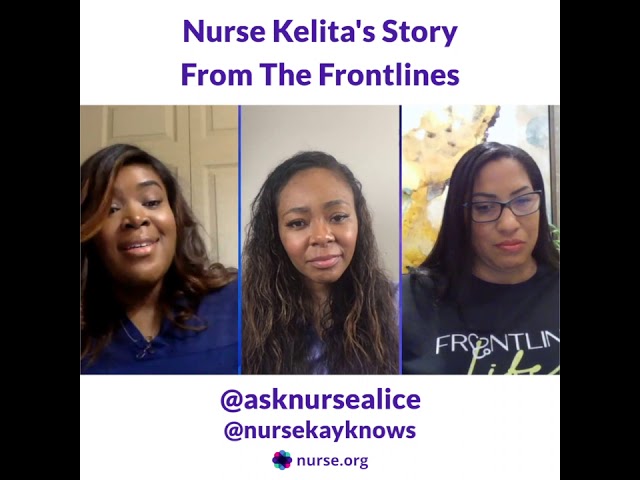 Kelita notes that it was her team’s strong unity that got them through that time. “We’re such a strong team on my unit, that it was a matter of, we need to do what we have to do for these patients coming in,” she said. “Everyone was feeling it, everyone was burned out, we need to learn…we just ran with it.”

Kelita notes that she’s also been a bit of a “clown” and a jokester in her unit and uses humor as a way to cope with some of the difficult aspects of nursing, so she was inspired to start creating her hilarious TikToks during the pandemic. “Instead of crying about what we’re doing, maybe we should laugh about it instead,” she notes. Her videos–which she was initially terrified to send out in the world–were an immediate hit. And she notes that the videos are a great way to talk about the struggles, challenges and triumphs of the nursing profession.

“That’s the best part of making those TikToks,” Kelita explained. “It talks about the whole aspect of nursing–the good, the bad, and the ugly.”

Twins, Traveling, and Teamwork: “It Was a Call We Had to Answer”

Next up, Nurse Alice turned a spotlight on Ivette, who spoke to Nurse Live Now aptly wearing a “Frontline Life” shirt from the Frontline business line she recently founded. Ivette happens to have a twin sister, who’s also a travel nurse, so the duo teamed up early in the pandemic to take on COVID assignments. The 9-year ICU veteran noted that that time was “like nothing I’ve ever seen before.” After completing her travel assignment in New York, she returned to her home in Houston, TX, only to jump right back into that state being hit by the virus. “I haven’t even taken a break!” Palomeque told the new station at the time. 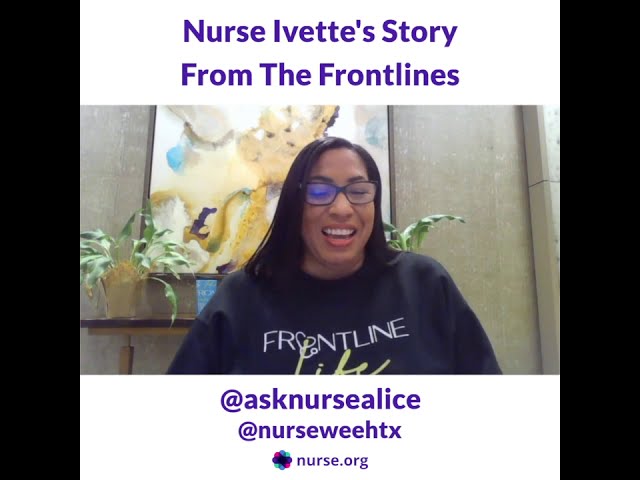 As Nurse Alice so aptly puts it, Ivette didn’t even really know what COVID would bring on since she volunteered to work so early on in the pandemic, which makes her efforts even more courageous. “She just stepped right into the belly of the beast,” Nurse Alice points out.

Despite her own fears about what she would be facing–and the vocalized fear and even tears from their mother–Ivette told Nurse.org that traveling to work in NY “was a call we felt we had to answer.” And having her twin by her side, she said, “sealed the deal.”

Although Ivette relied heavily on her twin for support, she also shared with Nurse Alice how, despite the obvious challenges and true tragedies that came out of her time in New York, the teamwork that she witnessed was an incredible thing to witness. She explained how everyone, from doctors to nurses to support staff, all joined together to care for patients and keep each other safe. “I had doctors helping me to do bed baths,” she said. “It didn’t matter. We’re all here, we’re all in this. That sort of teamwork, I haven’t seen anywhere else…it showed me that healthcare can and should be collaborative.”

The Fear of a Dangerous Virus: “This Could be You”

While the teamwork and unity that came out of the pandemic inspired Ivette and many nurses and healthcare workers like her, both nurses spoke to the true hardships that they witnessed and were a part of in caring for critically ill patients infected with the COVID-19 virus.

For instance, Kelita, whose unit has been strictly caring for COVID patients since the start of the pandemic, shared a story of the “moment it became to real” to her was when she came back to work to find the patient who, at only 25, was exactly her age and intubated. She also shared a very difficult story of being faced with caring for a patient who had a 16-year old daughter. Her patient passed away and for the first time in her career, she encountered the feeling of not having the strength to do it. She was able to call on the help of a team member, once again showing the beauty that is teamwork, especially in challenging times. The hard moments became all too real for the nurses who saw, very clearly, how this virus could affect even young and healthy people.

“It was so stressful seeing otherwise healthy people, with no comorbidities, no past medical history and the course of their life is now altered being on a vent or permanently trached,” Kelita explained. “It was heartbreaking…it was a feeling like ‘this could be you.’”

Ivette too, shared the own heartbreak she witnessed, especially in caring for Hispanic families who were hard hit by the pandemic. Of Hispanic descent herself, she told Nurse Alice that she would often be called to translate to Spanish-speaking patients and their families and how difficult it was to be helpless in witnessing their losses–especially when they couldn’t physically be near their loved ones.

The Role of New Grads in a Pandemic

Nurse Alice and Ivette also tackled the tough topic of new grads who were finishing school during this pandemic. Due to many of the unknowns, especially at the beginning of the pandemic, along with concerns over staffing and a lack of PPE, many nursing students were not allowed to have their in-person clinicals in their last year of nursing schools–which presented a huge challenge for both those new nurses and the staff working COVID units.

Ivetee shared that she actually just finished training a new grad and discussed some of the ways the pandemic changed how grads are oriented. For instance, she pointed out that because of the adaptations they had to make as a staff, she was teaching two ways of doing things: the way things are normally run and the way things had to be run now due to COVID modifications.

Kelita noted that because she works night shift on a stepdown unit, many new grads are hired on her unit as they learn the ropes. And the new grads on her night shift were walking into an incredibly challenging–and learning–experience. Fresh out of nursing school, they stepped directly into a pandemic and into situations like codes and vents and intubations. But as they all learned together, Kelita notes that not only were they able to tackle those obstacles together, but they were bonded together as well.

And it’s that bond–from nursing students to healthcare staff to the loved ones that they go home to at the end of a shift–that the nurses shared as the ultimate takeaway from the conversation. Because if the experience of a pandemic, working through a crisis and picking up the pieces in the difficult aftermath of recovering from the physical, mental and emotional effects working as a nurse has had this past year, has shown us anything, it’s the bonds with others that will keep us all going.

“I came home and just started hugging my parents,” said Kelita. “This has all shown me to just appreciate the people around you more and more.”