This Nurse Trained for the Olympics While Fighting on the Frontlines 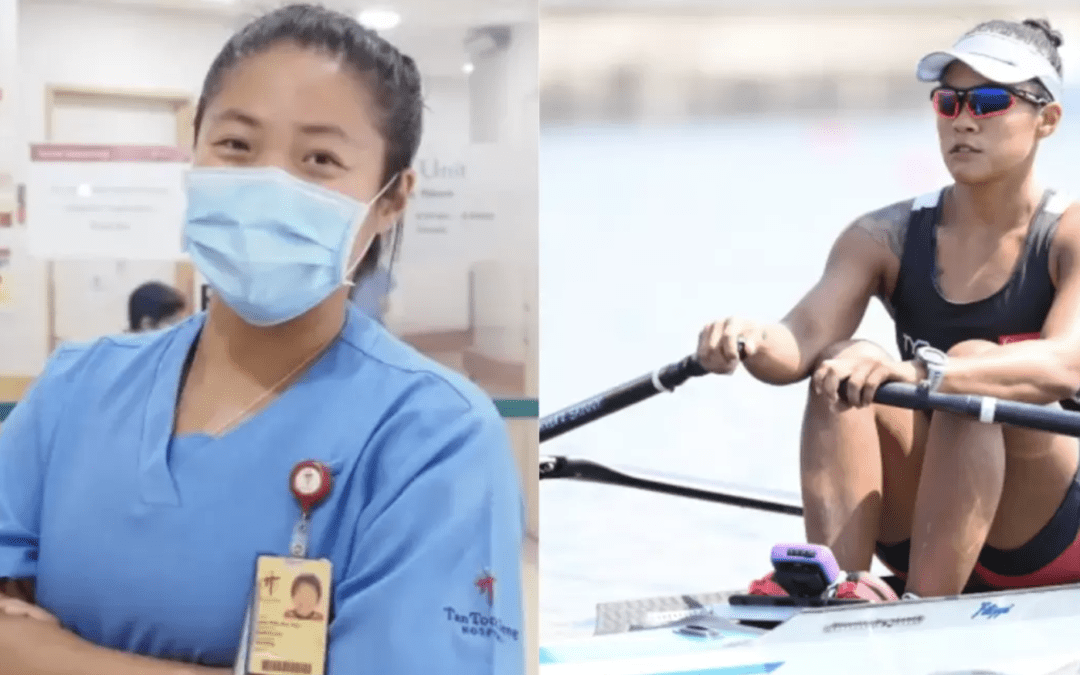 My family and I have been enthralled by the Olympics–every night, my kids clamor to switch on the TV to see what sports are on. (I have my suspicions that their love is largely due to the fact that the Olympics are the only screen time I’ll allow without a protest, but I digress.)

My son, in particular, announced that he is particularly eager to watch rowing, which surprised me, but after doing some digging into what athletes were competing in rowing this Olympics, I was shocked to see that one of the athletes was none other than a fellow RN.

Meet Joan Poh, a 30-year-old rower competing for Singapore in this year’s Olympics and a proud dialysis nurse.

In a profile of Poh for the New York Times, writer Tiffany May described how the rower actually decided to return to her post as a nurse in response to a call from the government for frontline medical personnel in the midst of the pandemic. Despite the fact that she had been training full-time to compete as a rower, she decided that serving her country outside of the water was important too.

So, she put aside her rows and donned her scrubs once again.

Actually, instead of just stashing her rows away, Poh decided that she could do both: work as a nurse during the pandemic and continue her training. Nobody ever called nurses lazy, am I right? Well, okay, minus that one card-playing snippet.

When you realize that Poh battled some very challenging circumstances to have a chance to row, it makes her dedication so admirable. She came from a background with two lower-class working parents who didn’t have time or the financial means to support their children in extracurriculars, but she still made it work. In 2019, she had elected to take a leave from the hospital and train full-time in Australia–which she was doing when the pandemic hit.

What makes Poh’s story so remarkable is that when she made the elective decision to return to work as a nurse, it was only April of 2020. In other words, she signed on at the very beginning of the pandemic, when tensions and stress and fears and anxieties were high. Although it could be argued that Poh is somewhat familiar with wading into murky waters, I’d say it’s a safe bet that even she had no idea what she was getting into by plunging straight into the ocean that was COVID-19.

While frontline nurses in COVID wards were busy tackling everything that came with the novelty of the pandemic, Poh used her skills as a dialysis nurse to support her fellow healthcare worker colleagues in the best way she could.

But she didn’t stop training, combining both her dreams and her feeling of duty to help.

In order to pull off her training and her shifts as a dialysis nurse, Poh would wake up at 5 AM to fit in a quick training session before starting work as a nurse at Tan Tock Seng Hospital. Then, once her shift was over, it was back to the gym for a (masked) exercise session.

The dedicated nurse faced many challenges on the job and in her training, from being forced to miss meals and sleep thanks to the brutal demands on all healthcare workers during the pandemic to the fear of being exposed to COVID-19 herself. Many COVID-19 patients needed dialysis, so Poh worried about potential infection for herself.

However, she made it through, and out of only 23 Singapore athletes that were sent to the Olympic Games this year, Poh is the only female rower.

“I understood from when I was young that sport is a luxury,” she told The New York Times. “To be able to pursue your dream is a luxury. And therefore, if you can, then you must.”

Now that Poh has officially taken another leave from the hospital in order to compete in the Olympics, it hasn’t stopped her from letting her nursing background shine. For instance, she told the NYT that she frequently sanitizes her seats, bags, and even tables while traveling––ignoring the occasional weird looks she gets.

She’s also displayed her supportive spirit by organizing a team of amateur female rowers, working with the Singapore Rowing Association to develop the team and show them the literal and figurative ropes of rowing.

So far, Poh has completed three out of four events without a medal (You can follow Poh’s Olympic schedule and competitions, along with rankings and scores here) but just as you might expect a nurse to feel, she is staying focused on the true measure of success: teamwork.

“How we define success is always about medals, but it’s not just about winning,” she said in the New York Times. “Yes, winning is important and I sure hope to come close to that in the next cycle, but seeing this team we’ve built is one step in the right direction. It’s also the way I’d like to define success.”